Ted Chiang’s Exhalation was different for me. Each story lives in its own perfect little universe, isolated in space but connected to an overarching search for individual and collective identity. The characters and settings are diverse and compelling enough to keep interest, but they ultimately take a backseat to the real protagonist in each story, a question of how our identities are shaped by the forces in our lives. As I’ve said before, my favorite form of science fiction asks “what if?” as a means to question what is. Exhalation falls squarely in this category.

Some minor spoilers below. 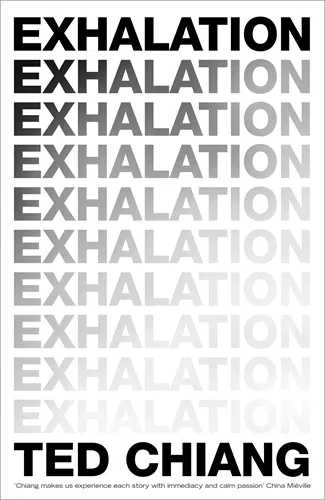 It’s only natural to question your own identity. I’m getting married soon(!) and approaching my mid-thirties. I heard somewhere that your personality solidifies at age 35. Whether or not that’s true, I’ve made a conscious effort to look at myself objectively and ask if I’m becoming the person I want to be. It’s a trail blazed through choices, each one leading to an unknown and unknowable future. But I can imagine myself in that future looking back at myself now, and through that lens I find my closest approximation to an objective measure of my changing identity. I use my imagined future self to ground each choice with a clear perspective on whether I will regret or find pride in it. Since I first took this view a few years ago, I’ve noticed a change for the better in my long-term decision making. My personality feels the same as it has ever been, but having this metric for assessing my identity has led me to seek opportunities I would have otherwise shirked.

The characters in a few of the stories in Exhalation have their own versions of objective measures of identity. There is a time-traveling doorway in ancient Baghdad in “The Merchant and the Alchemist’s Gate”. Through it, generations uncover the mechanisms that shaped their identities through autovoyeuristic excursions to the past and future. In “Anxiety is the Dizziness of Freedom,” parallel universes are real and people can talk to their “paraselves.” Characters struggle with the question of the value of an individual choice if they know that their paraselves will make every choice across the multiverse.

In “The Truth of Fact, the Truth of Feeling,” notions of internal and external truths are challenged as humanity evolves through technology. In one thread of the story, cultural identity and truth are challenged when European written language invades tribal Africa. A tribe pushes back on written records, choosing instead to lean on truth that reflects their current identity. Likewise, a father in the future is at odds with implanted memory aids that allow for pixel perfect recall of any moment in an individual’s life. His identity is challenged when he realizes his memories are false (in the “he remembers them wrong” sense, not the “implanted by aliens” sense), yet he’s formed his identity and shaped his decisions around them for decades.

One of the most striking aspects of the COVID crisis has been how quiet it is outside my apartment. We live in an urban business district. Without any white collar workers going in to the office, the streets are empty. We can hear birds chirping. I even ran with my dog in the middle of the street for a few hundred yards yesterday without worrying about cars. Walking through the neighborhood, I’m reminded of how we’re actively shaping and being shaped by the natural world. Exhalation’s eponymous story, and my favorite in the anthology, examines identity as a physical dependence on the natural world. In it, a tinkerer in a mechanical universe uncovers a link between life and entropy, which is rapidly rising. The entropic maximum of his universe will come within his lifetime, he discovers, at which point all life will cease. “The universe began as an enormous breath being held,” the narrator tells us. “Who knows why, but whatever the reason, I am glad that it did, because I owe my existence to that fact.” There is a message of hope that rings throughout the anthology. Time and again, we see identity questioned in order to strengthen a resolve for a better future. “Omphalos,” the penultimate story in the anthology, sees a scientist in a universe with a creator question her purpose. Her story is told as a prayer, wherein science is a means of worship. A sense of purpose is rooted in the idea that the universe was created for humanity. When evidence arises that the creator actually designed the universe for another species on another planet, her prayers turn from worship to trying to find her own meaning of life. The final passage of the story resonates with the hope I feel when I think about what science has taught us about our place in the universe.

But our lives have often been difficult even when we believed there was a divine plan, and we’ve persevered. If we have only ever been on our own, then our successes in spite of that are proof of our capabilities.

So I will return to the Arisona [sic] dig, Lord, whether it is under your watchful eye or not. Even if humanity is not the reason for which the universe was made, I still wish to understand the way it operates. We human beings may not be the answer to the question why, but I will keep looking for the answer to how.

I doubt my sense of self has changed because of Exhalation, but I enjoyed its prompts to reflect on identity. Well-formed science fiction holds a special place in my heart. Humanity’s story is more than a progression of bombastic techno-gadgets and space adventures. It’s an evolution of identity fueled by changes in our ability to control and understand the world around us. I love sci-fi that asks how these individual and collective identities might evolve as our species asserts a more prominent place in the universe.

In this time of social distancing and isolation, I think we’re all getting to know ourselves a bit better. If you’re looking for a book to keep you company, Exhalation is the perfect companion for introspection.